Ghalamdar (“the writer” in Farsi) is a graffiti artist (born 1994, Tehran, Iran) living and working in UK. He is an active member of Calligraffiti community and called between the four most recognized Iranian street artists who are making their own mark by Art Radar Journal, and between the twelve artists crucial to the world of Iranian street art by The Huffington Post.

FBB. Tell us your story, Ghalamdar.

I was born on February 1994 in a multicultural family in Tehran. I’m currently living and working in UK.

Art for me was all about reacting directly to the urban spaces so I started to paint and write graffiti on the walls. I was very young so I was trying to put some vibrant colours on the grey-coloured walls. It was completely based on instinct at first. I joined ELF crew which was the first Iranian graffiti crew and together we painted so many big walls around Tehran.

Later on when I found out about the Saqqa-kana movement I was really moved, it felt there is a massive cultural gap between my generation and the previous ones even though I remember spending most of my childhood with the illustrations of artists such as Ali Akbar Sadeghi and Noureddin Zarrinkelk. Feeling this cultural and artistic void ignited a new direction in my life and career, I needed to find out more about this identical transformation and fill the gap for myself.

My works are deeply personal, a voyage about discovering the factors and circumstances which have been engineering my identity, better to say it’s a curiosity about identity in personal and national scale. Therefore I’m very inspired by revisiting my Persian cultural heritage. During the past few years I’ve been experimenting with Persian folkloric materials which happened in the form of blending western wild style graffiti writings with Persian traditional calligraphy and Miniature paintings, to be more precise I’ve been trying to deconstruct and reconstruct all these materials in favor of secularizing them.

FBB. What do you consider being your greatest goal and achievement as an Iranian artist today?

Well even though I’m very young but I’m glad that I could have so many diverse experiences of both individual and collaborative projects during past years, from painting massive walls to having group exhibitions. I think the greatest goal is to bridge the Iranian society with the rest of the world and break the isolation.

Even though I’ve been recently focusing on my indoor practices but I still categorize myself as a graffiti artist, mainly because I see graffiti as a specific approach and aesthetic not just wall and spray paint, it’s far beyond that.

Non-stop contextual research and technical practice, which every artist does. More important I don’t limit myself to the Iranian community, I try to stay connected and collaborate with non-Iranian artists. Also I think academic studying is very important so I’m continuing my studies at Manchester Metropolitan University in Fine Art.

I’ve just finished a series of drawings and hand-made screen prints, now I’m working on a series of paintings based on Persian Miniature paintings.

I feel like I’ve painted so many walls during the past years, I need to explore the other mediums for a while. I think it’s time for me to think about a solo show.

FBB. You work has been recently selected and acquired to join the Fondation Behnam Bakhtiar’s Permanent Collection. What message do you have to other Iranian artists who would like to have their works in permanent collections and shown in museums?

I’m proud of being supported by FBB, there is nothing more heart-warming than supportive Iranians.

I think we are facing an identity crisis especially among my generation and we should go backward and study about our history and culture to understand our identity and then move forward to craft it. There is no future without knowing the past at the very present.

A lot of exciting projects are coming up, for instance I’ll be at Stanford University to participate in “Art, Social Space and Public Discourse” symposium, I’ll also paint couple of walls as part of my artist-residency there.

Also I’ll be featured in the “Traces of the soul” documentary film directed by Martin Cooper. It’s a film about different styles of calligraphy around the world which features few of the important calligraphy artists and their unique styles.

And just recently I illustrated the cover of the German translation of the “Fereydoun se pesar dasht” book written by the famous Iranian writer Abbas Maroufi and published by Gardoon verlag in Berlin. It should be available very soon.

FBB. Where can our audience purchase your work?

Well at the moment I’m focusing on FBB but you can also buy my works from The Mine Gallery and Emergeast Gallery and directly contacting me via my website. 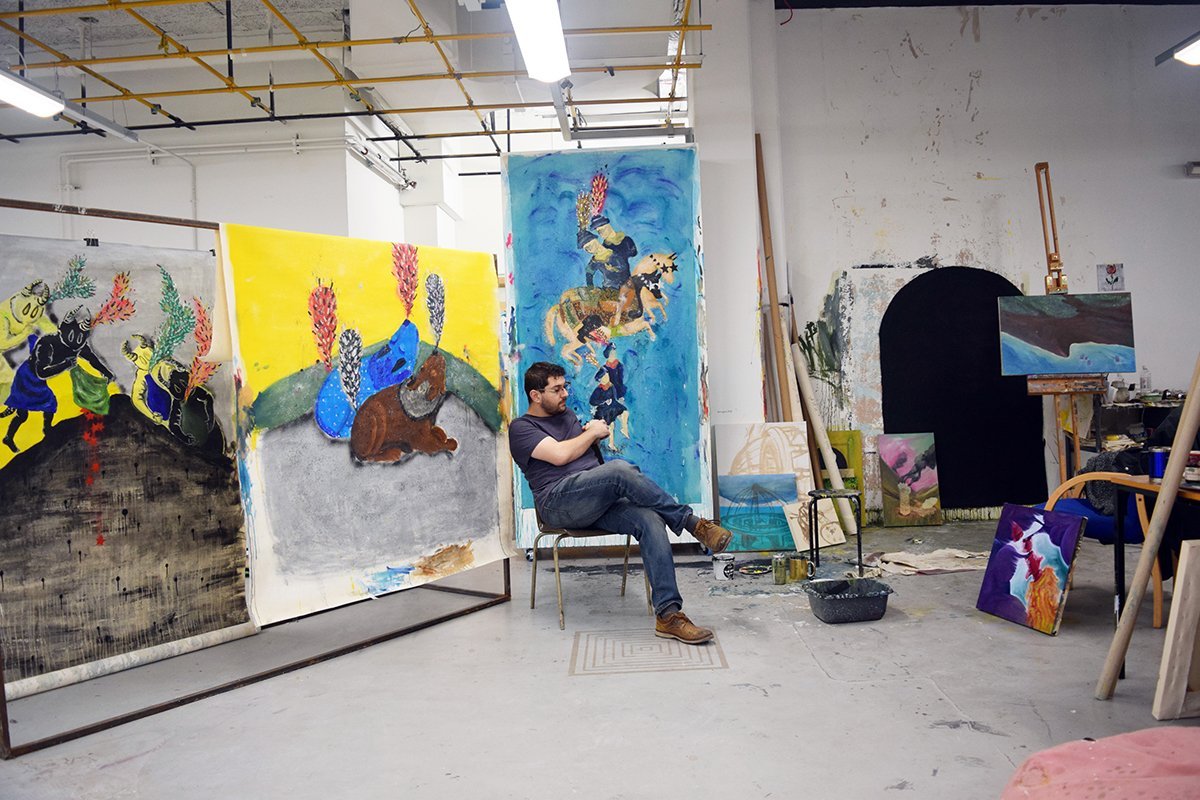 Interview with MAMI
Born in 1975 in Rasht, Iranian artist Mohammad Khodeshenas (nicknamed MAMI) was trained in graphic design, culminating in an undergraduate...
Fermer